Milton-Freewater’s AVA acclaimed for its singular sense of place

It was the nod heard ’round the wine world: Harvey Steiman of Wine Spectator called The Rocks District of Milton-Freewater “the most distinctive AVA in the United States.” He further credited the area for “making some of the greatest wines in America.”

Wine critic Jeb Dunnuck, formerly of The Wine Advocate, duly praised the region: “This incredible terroir produces an exotic, perfumed and textured style of wine that’s one of the most unique — and identifiable — in the world.”

Others have echoed the sentiment. Simply put: The Rocks is a special place, and its wineries and vineyards are really just getting started.

In 1996, Christophe Baron, a young winemaker from Champagne, visited Oregon with the hopes of planting Pinot Noir. While touring the Walla Walla Valley, driving through northeast Oregon, Baron spotted an old orchard; the floor was covered in cobblestones. The rocky terrain reminded him of his beloved Chateauneuf-du-Pape. Despite some locals calling him “that crazy Frenchman,” Baron purchased the land and planted his first vineyard: Cayuse — the name derives from “cailloux,” French for stones.

“We, as wine-drinking consumers, benefit incredibly from this decision,” says Dunnuck. “I do think that the courage and the vision that Christophe showed early on is not given enough credit.” And yet, when talking to the current players in the ever-evolving region, you’d be hard-pressed not to hear Christophe as part of the conversation — even without his involvement in the AVA’s establishment  — he would later pen a letter to the TTB in support of it.

It was Steve Robertson, owner of SJR Vineyard and the winery Delmas, who instigated the petition for The Rocks District of Milton-Freewater, a nested appellation within the Walla Walla Valley AVA — Walla Walla was approved in 1984. Robertson’s enthusiasm and knowledge of the unique geological conditions, including mineral composition, hydrology and temperatures of the volcanic rocks, provided sound evidence. Other wineries, in addition to Delmas, eagerly joined the cause: Buty, Rotie, Figgins, Watermill, Saviah and Zerba. 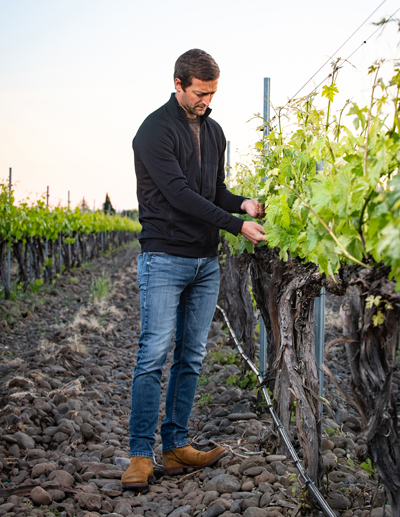 Josh McDaniels at Lefore Vineyard in The Rocks District of Milton-Freewater.Photo by Kathryn Elsesser

Robertson turned to renowned geologist Dr. Kevin R. Pogue, a professor at Whitman College and champion of the rocky region, to submit the petition. Approved in February 2015, the AVA remains the only one with borders defined by the pebbles and basalt cobbles in a mix of sand and silt. Today, Robertson leads the wine region’s official alliance, The Rocks District of Milton-Freewater Winegrowers Association, which serves merely 34 members.

The intensity of flavors and aromas that come from the lower-yield, delightfully distressed vines come with a price. “Farming the rocks costs us at least double compared to farming our Red Mountain estate,” says Todd Alexander, winemaker for Force Majeure.

And then there’s the cold. Many follow the labor-intensive system of Cayuse, burying the vines immediately after harvest to survive the winter, a model used in few places in the world. According to Robertson, SJR Vineyard reached -12°F in 2017. “We had to cut everything down and let it grow back.”

His daughter, Brooke Delmas Robertson, a respected consultant with considerable experience working in other wine regions, searched to find solutions to the freeze issues after cutting down SJR several times.

She developed a vine training system for SJR, which Delmas Robertson terms “low mini head training” (MHT). She explains, “We can cover the entire vine — the trunk, the head and the vine — at the end of the season, which limits the damage that can happen later on. It seems to be working really well.” As a result, other growers intend to use her method.

Perhaps the most exciting development in The Rocks District is the emergence of tasting rooms and production facilities.

After Harvey Steiman’s commendation, followed by accolades from the wine media, tourism ramped up but abruptly hit a roadblock, when visitors discovered the closest they could come to tasting The Rocks was literally licking the cobbles — some actually did this to confirm the minerality they’d read about.

After Force Majeure finished its production facility in time for the 2019 harvest, the winery has plans to renovate the adjacent 1940s Pleasant View schoolhouse into a proper tasting room, keeping the brick exterior and much of the character intact. For now, they welcome guests by appointment to enjoy a seated tasting in the cellar, a sophisticated space worthy of the wines made by phenom winemaker Todd Alexander. Force Majeure owners Susan and Paul McBride don’t mess around when it comes to talent; bringing in Alexander was no exception. His résumé includes Napa Valley cult producer Bryant Family Vineyard.

“I could have stayed there and had a comfortable career,” says Alexander, “but the opportunity to have a say in an emerging region is a rare opportunity.” He’s experienced that and more in The Rocks. Among other ridiculously high-scoring efforts, his 2016 Force Majeure SJR Vineyard Syrah received a 100-point score from Dunnuck’s wine blog: www.jebdunnuck.com.

In 2015, Mike Martin of The Walls Vineyards purchased 20 acres — now named Petros, the Greek word for rocks — following early critical success with non-estate wines. But planting an estate while starting a winery and opening a restaurant — Passatempo Taverna in Walla Walla — proved to be a challenge, even for a former Microsoft attorney used to high-stakes situations.

He hit the pause button until last summer when he found himself without a winemaker close to harvest. Enter Todd Alexander, who “graciously offered,” according to Mike, to get him through the vintage.

Winemaker Todd Alexander of Force Majeure in The Rocks District of Milton-Freewater. Photo by Kathryn Elsesser

Alexander was no stranger to The Walls and vice-versa. Force Majeure spent two harvests there while waiting for its facility to be completed, not to mention Todd’s wife, Carrie, is the general manager of The Walls. Plus, the Alexanders frequent Passatempo.

The two hit it off and forged a business relationship moving forward.

So, when Todd Alexander’s phone pinged alerting him of the opportunity to purchase Rockgarden Vineyard, the 10-acre iconic estate of Buty Winery, the first person he considered was Martin.

Martin responded, “It’s time to put the vineyards in The Walls Vineyards.”

By purchasing Rockgarden and finally planting in Petros, Martin renewed his commitment to The Rocks. “It always has been, but in this last year, I wanted to make a statement to our followers, to Todd and Carrie,” says Martin. “I’m not hitting the brakes; I’m hitting the gas a little harder.”

After making wines in their garage outside Seattle, Toby and Chris Dukelow of DuCleaux Vineyards moved to The Rocks District and stumbled across their dream property: a 1921 farmhouse with unobstructed views of the Blue Mountains. Though serious about their wines, the no-nonsense pair has been relaxed by their blended family of six — all teenagers under one roof. Starting a winery paled in comparison.

Until they are able to renovate other parts of the property, which will include a tasting room and vintage trailers to rent for wine tasting excursions, guests can enjoy their wines in their living room. The site sits in the eastern corner of the AVA and includes eight acres of vines planted to Syrah, Grenache, Mourvèdre, Cinsault, Viognier, Marsanne, Roussane and Grenache Blanc, which will be ready for harvest in 2021.

Others are also planning tasting rooms and event spaces: Maison Bleue will break ground on a production facility and tasting room in 2022; The Walls has been eyeing an existing structure ripe for remodeling at Petros Vineyard. Proper Winery is designing a tasting room at the vineyard in 2022. And Watermill plans to convert a structure on the estate vineyard for either events or retail. In the meantime, the brand’s tasting room in old town Milton-Freewater hosts tasting and events. With an early presence in The Rocks, Watermill is poised to become one of the largest grapegrowers in the AVA, with 22 more acres slated for this year, and another 18 to follow.

All eyes have been on Rotie Cellars, the trendsetter — though owner/winemaker Sean Boyd cringes at the term — for building a dedicated tasting room on an estate property in the AVA. Not just any structure, but one under the consultancy of renowned architect George Suyama, who happens to be a huge fan of Rotie. But Boyd’s energy initially went into cultivating his estate vineyard, Rotie Rocks, planted to Grenache and Syrah.

Perhaps the most highly anticipated opening of a winery in decades was Valdemar Estates last spring. The project is a wine enthusiast’s trifecta: Marie-Eve Gilla, famous for her Syrah and Chardonnay as longtime vintner for Forgeron Cellars, was hired as winemaker; the building itself — over 24,000 square feet, including an outdoor waterfall and reflection pool — is the first of its kind in the area; and, of course, the Spanish winemaking pedigree of owner Jesús Martínez Bujanda.

The fifth-generation vintner of the famed Bodegas Valedemar — the family’s first winery was built in 1889 in the Rioja region of Spain — met Pogue and Robertson, and set his sights on The Rocks District.

“What instantly connected us to the AVA was a family estate in Rioja, Finca del Marquesado,” says Bujanda. “We believe that Garnacha (Grenache) can be an amazing grape there – our favorite Garnacha comes from that super rocky estate in Rioja, so everything just clicked.”

The eight-acre site will be planted to Grenache, Grenache Blanc, Viognier, Syrah and Viura, a Spanish white wine grape also known as Macabeo.

“I’m particularly excited to see more whites in this region and how they express themselves,” says Robertson, who just released his first Viognier under the Delmas label — he’s also a decided Grenache fan and will harvest the varietal this fall from 14-year-old vines.

The growing success for the whites is dependent on planting the rows in a different orientation, according to Marie-Eve. “It is a very warm site, and instead of going north to south, we are going east to west, which will allow us to keep a lot of canopy on the south side,” she said.

Currently, Valdemar offers two Syrahs from The Rocks District: one from Stoney Vine Vineyard — adjacent to Valdemar’s estate property — and the second from older plantings at Lefore Vineyard. The two lots showcase the diversity one can achieve in profiles as a result of different trellising systems: goblet/head-trained versus vertical shoot positioned/bilateral — excellent examples of the different viticultural practices in the AVA. The older plantings from Lefore are part of the Bledsoe-McDaniels project.

Bledsoe-McDaniels Winery is an investigation into site-specific Willamette Valley Pinot Noir and Walla Walla Valley Syrah, noting the differences and similarities of varietal and terroir. The project between Drew Bledsoe, former NFL quarterback and owner of Doubleback and Bledsoe Family Winery, and esteemed winemaker Josh McDaniels will release its first Syrah from Lefore Vineyard in the fall.

“We bought one of the oldest plantings in The Rocks (mid-1990s),” says McDaniels, “which is really cool.” He had previously worked with Cabernet from that vineyard with great success for Doubleback.

Her father offers another insight: “This AVA has brought the Oregon and Washington state agencies closer together, given its potential to speak more broadly to global positioning,” says Robertson, “speaking directly to a more diverse consumer base and raising the bar for all who care to explore its offerings.”

Martin, with a renewed sense of purpose, also concludes: “We’re going to see some different interpretations, which is a tremendous thing for the region and for winemakers. All the great wine regions have a distinct profile, but diversity of artistic expression, that’s the most exciting thing.”